Buoyed by the tremendous response received to the International Yoga Day last year, a repeat performance appears to be on the cards for this year. The Modi government is pulling out all stops to ensure that this time around the event will be an equally impressive one.
It will be scheduled in June and would be a one hour long Yoga protocol as compared to 45 muteness of last year. And, in order to ensure smooth participation by foreigners, advanced yoga retreats would be set up in scenic locations in he country and there would be a mass Yoga demonstration in one of the BJP-ruled states.
Moreover, the government wants to ensure a "100% participation" by all institutes including the IITs, NITs and IISERs with a special 4-minute long 'Yoga Geet' which is to be sung out aloud.
This has been reported in timesofindia.indiatimes.com dated 18 February 2016. 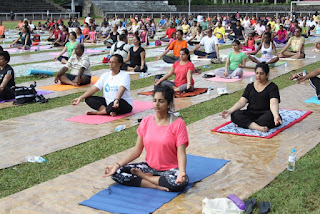 The next Yoga day will be celebrated with considerable fanfare. It has been decided to increase the duration of the common Yoga protocol from the 45 minute long duration practiced last year to an hour long one this time. The additional 15 minutes will be for 'institutional Yoga practice' which will be 'preferably Pranayama, Dhyana, Yoga Nidra and Satsanga'.
In addition, a week long "advanced Yoga retreats and camps" will be organized for foreigner in April-May period at scenic locations like Goa, Mumbai, Mount Abu, Jaipur, Delhi, Mysore, Rishikesh and other tourist destinations. In order to organize these, a token financial assistance will be provided by the Department of AYUSH to leading Yoga institutions.
Last year, the venue was Rajpath in New Delhi where Prime Minister Narendra Modi participated. This year, a similar "major mass Yoga demonstration program on the lines of the International Conference on Yoga" are planned to be organised in one of the BJP ruled states — namely, Gujarat, Haryana, Rajasthan or Madhya Pradesh.