Twin Otter plane of Nepal crashes killing all 24 on board

The Twin Otter aircraft of Tara Air, Nepal, has crashed in the mountains and all 24 people on board has been killed. The flight was from Pokhara to Jomsom and it lost contact with the control tower soon after take off. Most of those on board were Nepalis and the reason of the crash is yet to be established.
This has been reported in bbc.com dated 24 February 2016. 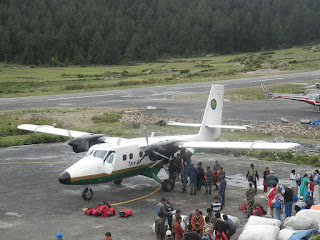 There were three crew members and 20 passengers, one of them Chinese and one Kuwaiti. There were also two children. As informed by the director general of the Civil Aviation Authority of Nepal, the wreckage of the plane was found near the village of Dana in Myagdi district.
Tara Air has indicated that "the weather at both origin and destination airports was favorable" for the 20-minute flight. But, as per Nepal's army, fog had hampered the search for the aircraft.
Pokhara is a resort town located some 200-Km west of the capital Kathmandu while Jomsom is a short distance further north - it is the starting point for many people trekking in the Himalayas. Incidentally, Nepal has a limited road network and many of the areas are accessible only on foot or by air.
In 1949 the first aircraft had landed in Nepal and, since then, there have been more than 70 different crashes involving planes and helicopters, in which more than 700 people have been killed. Most of the accidents have been either due to bad weather, or inexperienced pilots or inadequate maintenance. In 2013, the European Union had banned all Nepalese airlines from flying to its territory for safety reasons.