Sir Richard Branson is back in business to relaunch his Virgin Galactic project and send passengers into space. Virgin will charge passengers $250,000 for a short journey into zero gravity and enjoy a glimpse of the planet Earth from the edge of space.
This has been reported in news.sky.com dated 19 February 2016. 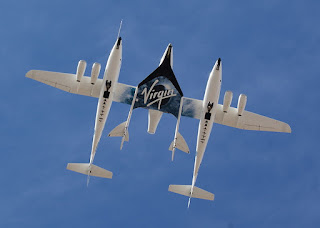 Sir Branson's venture had suffered a devastating setback in 2014 after the death of one pilot and serious injury to a second after the spacecraft crashed on a powered test flight. It happened after SpaceShipTwo fired up its rocket following a high-altitude drop from Virgin Galactic's WhiteKnightTwo mothership.
It crashed over California's Mojave Desert and the accident was attributed to the co-pilot unlocking a braking system too early.
Therefore, the project's new SpaceShipTwo will now be unveiled by Sir Richard Branson - it is a six-passenger space plane and it will take thrill-seekers and commercial customers on five-minute hops into suborbital space, reaching altitudes of about 100-Km.
Incidentally, despite the setback Virgin Galactic is going ahead with plans to build its own space launchers, including the new passenger vehicle and LauncherOne rockets that will be designed to lift small satellites. These activities are expected to commence from next year.
Apart from Branson, there are others who are working on sending paying passengers into space. They are SpaceX and Tesla founder Elon Musk, Amazon's Jeff Bezos and Microsoft co-founder Paul Allen.
Sir Richard Branson wants to, ultimately, build a hotel in space.