A jumbo elephant entered the Siliguri town and played havoc by destroying a number of buildings and vehicles parked on the road. It was a lone male elephant and it marched through the heart of the city, flattening huts and stamping on the parked motorbikes.
This has been reported in telegraphindia.com dated 10 February 2016. 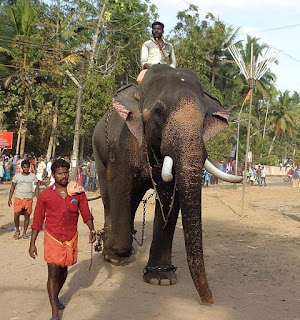 The animal had entered Siliguri early morning at around 3am from the Baikunthapur reserve forest. Hundreds of curious people gathered around, shouted and clicked pictures. The elephant looked lost and confused and kept going deeper and deeper into residential neighborhoods. It finally stopped on the busy road that leads to Kalimpong and Sikkim.
In view of this sudden disturbance, the peak office-time traffic had to be halted at 10am on the road that has offices, malls and housing complexes on both sides. The forest officials had to immobilize it with darts.
Later, at around 12.30pm, it was loaded on to a truck and driven to a wildlife sanctuary near Siliguri where it was released at around 5pm.
The whole procedure took nine hours and it resulted in flattening 100 shanties and at least 20 motorbikes and an equal number of cycles - fortunately, no one was injured.