This is an example of how friends can influence the decision of other friends - it is the story of how two runaway kids aged 14 and 10, ran away from their homes in Bihar to see and enjoy a ride in the Delhi Metro. Delhi is 1200-Km from Begusarai in Bihar where the boys hailed from.But, their mission did not succeed and they will have to wait some more time to enjoy that dream ride on the Delhi Metro.
This has been reported in timesofindia.indiatimes.com dated 11 February 2016. 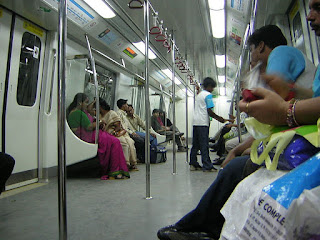 The kids got the idea after one of their friends had been to the capital with his family. He returned and narrated the wonders of travel by the Metro. The kids were impressed and decided to get a first hand experience. Therefore, the two boys boarded a train to reach Delhi. Unfortunately, an acquaintance of their families saw them boarding the train and immediately informed their parents, who were themselves on the lookout for the missing boys.
The family members informed the police and the government railway police (GRP) and the boys are traced to Bareilly where they were taken off from the train. Both the boys had their mobile phones with them and were tracked quite easily. The kids have, since, been taken back home by their families.