In 2012, Birbhum district in West Bengal had won an award for "zero poppy cultivation" and, in 2013 and 2014, a nominal cultivation (30 to 50 acres) had been noticed. But in the latest survey carried out by excise officials, poppy is being cultivated on 500 acres in Birbhum. It is illegal to grow poppy in the state and the officials and police have destroyed poppy on 50 acres and are in the process of destroying the remaining.
This has been reported in telegraphindia.com dated 22 February 2016. 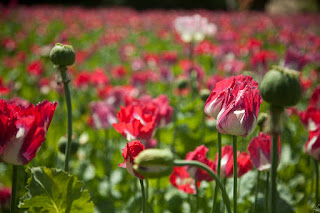 It seems this sudden spurt in poppy cultivation in Birbhum since 2014 is based on assurances given by a section of local political party leaders ahead of the Assembly polls that the panchayats would not pass on information about the illegal farming to the excise department and the police. Normally the panchayats keep the authorities informed but, this did not happen and the excise department began to receive information about an abnormally high rate of poppy cultivation.
A survey revealed that poppy was being cultivated on about 500 acres in the district and local leaders did not inform the excise department since elections are coming and they did not want to antagonize the voters. Opium is usually extracted from poppy pods in January and February and, once that is done, the plants have no value.
One kilogram of opium was sold in the open market at rates between Rs 60,000 and Rs 90,000 and, if a farmer cultivates the crop on one acre, he stands to earn at least Rs 10 lakh.