Maharashtra has made helmets compulsory for pillion riders also and two-wheelers sold in Maharashtra must be sold with a set of two helmets. This is as per the rule of the state transport department. The directive to two-wheeler dealers to sell not one, but two helmets to riders, means the protective head gear would be mandatory for pillion riders as well.
This has been reported in timesofindia.indiatimes.com dated 7 February 2016. 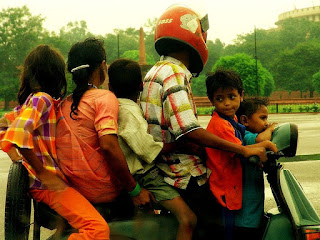 The move has come nearly six years after the Supreme Court had ordered that it is mandatory for dealers to sell two helmets - one for the rider and the other for the pillion. Obviously, pillion riders who do not wear helmets will have to face punishment under the Motor Vehicles Act.
With this new rule coming into force, showrooms that sell two-wheelers will have to deliver vehicles, along with two helmets. The compliance wil be done by the regional transport office (RTO) who will be responsible for checking the sale of the headgear at the time of registration of vehicles.
Under the provisions of Section 129 of Motor Vehicle Act, 1988 -- every person driving or riding (otherwise than in a side car, on a motor cycle of any class or description) shall, while in a public place, wear a helmet conforming to the standards of Bureau of Indian Standards, exception is only for a Sikh wearing a turban.