Traffic jams in Kolkata works out to a loss of Rs 2.7-crore every year

Traffic jams are a common sight in all metro cities but, the extent and nature of jams in Kolkata works out to a loss of Rs 2.7-crore every year. This has been calculated based on a research study carried out by Calcutta University's Centre for Urban Economic Studies (CUES). AS per its findings, commuters cumulatively lose over Rs 74,000 in just two hours of traffic jams in the city - and this adds up to nearly Rs 2.7 crore a year.
This has been reported in timesofindia.indiatimes.com dated 2 February 2016. 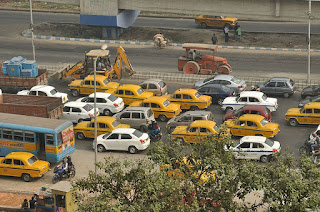 The study was conducted on only 10 of the roads in the metro but the results throw up shucking nature of not only the real economic cost but also the associated environmental and health cost. These are the consequences of the city's bumper to bumper crawl. In fact, at peak office hours, the average speed on some roads is hardly 9kmph on MG Road and an embarrassing 18kmph on the Kolkata's longest thoroughfare, AJC Bose Road.
On Vivekananda Road, where average speed is 40kmph, the loss is the least - Rs 338.58 But commuters who travel regularly on Raja SC Mullick Road (16kmph) lose Rs 878.05 every day. Moreover those who get caught in traffic jams lose productive time, vehicles burn more fuel and emit double the pollution in slow traffic. All these elements add up as an enormous economic, social and environmental cost.