#NarendraModi #barackobama #FrancoisHollande #dogsquad Labrador and German Shepherd dogs trained by the National Training Center for Dogs (NTCD), Bhanu, near Panchkula in Haryana, is now imparting training to the dogs who will be guarding the Prime Minister Narendra Modi. A contingent of Special Protection Group (SPG) comprising Labrador and German Shepherd breed of dogs, along with their handlers, is undergoing necessary training at the state-of-the-art training center of the Indo-Tibetan Border Police (ITBP).
This has been reported in timesofindia.indiatimes.com dated 30 January 2016. 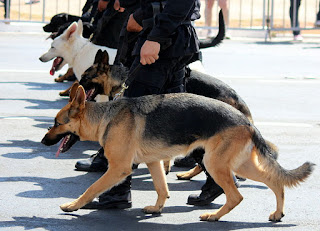 It is an intensive training program and the dogs have already completed seven weeks of training and have 17 more weeks before they can qualify and pass out for deployment in the PM's security. The dogs will be trained in anti-sabotage checks and these would be at par with the elite ITBP crack K9 units. After passing out these canines would be a part of the PM's sniffer service.
ITBP's dog squad of "K9 explosive detection unit" is the only one in India to be trained following highly classified module at NTCD Bhanu - these will certify the canines only with 100% accuracy.
This unit had been deployed with US Navy Seal dogs during US President Barack Obama's visit to Delhi last year and during recent visit of French President Francois Hollande this year.