Madhya Pradesh is determined to to promote tiger tourism in a big way by linking up with the Indian Railways. In order to spread awareness about the national animal, Indian Railways will offer complete packages including train journey, safaris and accommodation to cover the wildlife circuit consisting the tiger reserves of Kanha, Pench and Bandhavgarh.
This has been reported in timesofindia.indiatimes.com dated 26 February 2016. 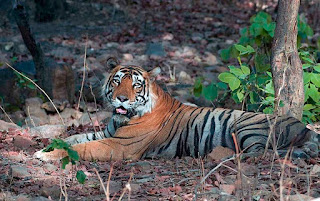 Railway minister Suresh Prabhu while presenting the Railway Budget 2016-17 in Parliament has indicated that tourism holds great potential for economic development and job creation in the state and Indian Railways will link up with the state governments and operate tourist circuit trains. They will also explore the possibility of a revenue sharing model.
Railway minister added that India's rich bio diversity and wildlife is one of the mainstays of Incredible India campaign.
But, an wildlife activist has expressed his reservations because, introducing a dedicated tiger circuit could pose a major threat to the animals that move around freely in the reserves. The possibilities of them being hit by trains could increase.
Four big cats have died this year in the state. Last year, the state had recorded the third highest tiger mortality in the country with 11 tiger deaths - this is as per information of the National Tiger Conservation Authority (NTCA). The first big cat death in the country this year was also reported from MP's Pench Tiger Reserve on January 2.