#christchurch #earthquake #wellington #sumner A quake of 5.7 magnitude struck Christchurch and it struck a week before the fifth anniversary of the deadly 6.3 magnitude earthquake which killed 185 people on February 22, 2011. However, this time, there are no casualties or serious damage or injuries except for a cliff that has fallen down in Sumner.
This has been reported in nzherald.co.nz dated 14 February 2016.
The epicenter of the severe quake was 15-Km east of the city and was felt as far north as Wellington. The first quake was followed by another, moderate one with a 3.5 magnitude at 10-Km north-east of the city. Aftershocks are believed to be continuing. 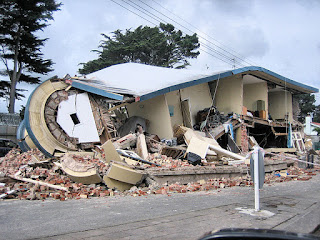 There are reports of shelves falling in homes, shops and libraries and two malls, the Riccarton Mall and Northlands Mall, have both been evacuated. As per fire services, there are reports of liquefaction and a burst water mains in Pines Beach, near Kaiapoi. There was also flooding with power lines down in New Brighton.
As a result, the National Crisis Management Centre has been activated. Emergency services have indicated that a cliff had collapsed in Sumner and power has been lost to 450 customers between Burwood and Spencerville and at 100 homes in Akaroa. There is a police cordon at Scarborough Hill blocking access to the fallen cliff.