World Sparrow Day is on March 20 and, we all know that the house sparrows ae gradually vanishing from our midst - thanks to modern day construction of houses where there are no crevices or nooks and corners where these birds can nest. Also, with thanks to air-conditioners, there is hardly any opening through which the birds can enter any house.
Therefore, in Jaipur, a small group of conservationists is busy trying to make people realize the need for introducing minor changes around their homes so the environment becomes friendly to these little birds.
This has been reported in timesofindia.indiatimes.com dated 26 February 2016. 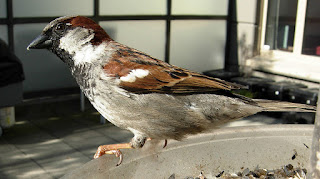 The initiative started with free nest boxes that could be positioned on balconies and wait for the birds to make nests in them. The initiative did take off and the birds laid eggs. Once the chick was ready to spread its wings and take flight, they had to be fed high-protein insect diet. But, modern gardens do not sustain insect populations.
Sparrows are not birds that nest in trees but they need to be close to humans, and have evolved together with humans. Unfortunately, modern day families are small as are their living spaces - hence, they cannot allow the birds in because of the litters that they generate.
Therefore, it is necessary to work out a sort of comprise so that man and birds can coexist.