In an effort to woo tourists, West Bengal is hoping that the Sunderbans would attract tourists because the Sunderbans is not only about Royal Bengal tigers but also about the world's largest mangrove forest. The focus is shifting from the tiger to the lesser highlighted strengths of the Sunderbans. Tigers can easily be seen at Tiger Reserves in Ranthambore, Pench, Bandavgarh or Tadoba.
This is reported in telegraphindia.com dated 2 February 2016. 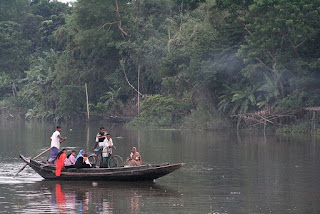 AS admitted by the joint director of Bengal tourism, most tourists come to the Sunderbans to see a tiger, only to realize that the terrain is very difficult and not like in other popular tiger sanctuaries. Therefore,plans are afoot to offer other attractions of the Sunderbans to the tourists. These would include - the mangrove forest, the local community and their lives, the rich flora and fauna.
Setting eyes on a tiger here is more about luck than effort because the sanctuary can be toured only by boat. One drawback is that there is no jeep or elephant safari to take tourists right into the tiger's lair. Incidentally, most tourists drop in on the Sunderbans for two to three days and it is not feasible to cover this whole area by boat within such a short span.
Among other attractions are the Saltwater Crocodile - the male of the species measures between four and five metres in length and weighs 400 to 1,000kg and is believed to be the largest of all living reptiles in the world. Then there is the Irrawaddy Dolphin apart from seven types of kingfishers and the endemic Masked Finfoot.