#PrinceWilliam #KateMiddleton #TajMahal #Agra India will get to host the Royal Couple Prince William and Kate Middleton who are expected to visit the Taj Mahal during their forthcoming tour of India - they will reportedly follow in the footsteps of Princess Diana. The Duke of Cambridge's mother was pictured sitting on a bench in front of the landmark in Agra in 1992. It was a symbol of her loneliness months before she and Prince Charles separated.
This has been reported in dailymail.co.uk dated 7 February 2016. 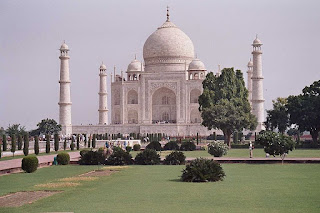 It is understood that Price Wlliam (33) and Kate (34), will visit the UNESCO World Heritage Site in April. An 'advance team' from the British High Commission has held talks with officials in Agra to sort out security arrangements for the royals. Of course, the advance team did not disclose much information about the itinerary. The exact dates were also not shared.
If it materializes, it will be the first time Kate or William would have journeyed to the country. Earlier, the Prince of Wales had visited India as recently as November 2013, on a nine-day tour.
The itinerary includes traveling round the Asian subcontinent between April 10 and 17 - their children would not be with them. Wills and Kate felt the trip would be too grueling for their children. It will not be the first time that the couple would have come minus their children. The couple had been to New York City in December 2014 without George who remained at home.
Incidentally, it had been revealed in November last year that their Royal Highnesses The Duke and Duchess of Cambridge will visit India in the spring of 2016. It was being undertaken at the request of Her Majesty's Government and will be the first time The Duke and Duchess have visited the country.