Khadi is a handwoven cloth that was made popular by Mahatma Gandhi during the freedom struggle, but, over the years it has lost its charm even though a section of the population cries hoarse to promote for everything desi!! Therefore, the 10th edition of Rashtriya Khadi and Saras Mahotsav, which began on Morbadi grounds in Ranchi, is of special importance. It is a khadi mela and, there are about 500 stalls of khadi and rural handicraft products from 25 states. The products include spinning on wheels, weaving on handlooms and pedal husking.
This has been reported in telegraphindia.com dated 8 February 2016. 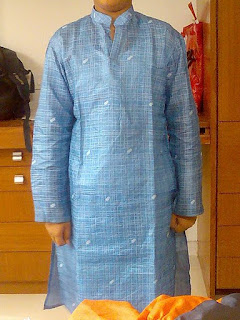 For the art buffs, the state art and culture department has put up a pavilion that showcases paintings of about 60 artists of Jharkhand. This pavilion has been put up for the second successive year to promote state artists.
Moreover, there were other stalls that offered a wide variety of products, from pickles to ayurvedic medicines, from bamboo to dhokra artefacts, from miniature Eiffel Tower replicas to navratna meenakari ornaments of Rajasthan.
As far as khadi was concerned, there were khadi shirts and bundies in attractive colours in different stalls and the prices were also reasonable.