#heart #health #cholesterol It is a well known fact that certain types of foods have the power to decrease heart disease risk by lowering LDL (bad) cholesterol levels and raising HDL (good) cholesterol. Cholesterol-busting powers of fish, oatmeal, red wine, beans, and olive oil is not new but, there are other foods that can also help the cause.
This has been reported in foxnews.com dated 23 January 2016. 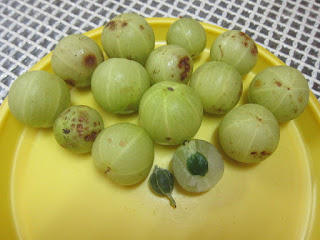 Some of other foods that can help reduce bad cholesterol are Indian gooseberry (amla), barley, avocado, strawberries, probiotics and grapes.
Indian Gooseberry - it is a round, green fruit that is sour, bitter, and quite fibrous. It is found in India, the Middle East, and some southeast Asian countries and is used in Ayurvedic medicine for thousands of years. It functions by reducing total cholesterol levels, including the fatty acids called triglycerides, without affecting levels of HDL (good) cholesterol. It can be eaten fresh, as chutney added to steamed vegetables, or in powdered form added to a smoothie.
Barley - we know that oatmeal has numerous benefits because it lowers blood cholesterol levels, but barley is equally good. Like oatmeal, barley is high in soluble fiber which helps to reduce the amount of bad cholesterol in the blood. Barley can be taken at breakfast time. Or - cold barley salad tossed with some olive oil, lemon juice, and fresh herbs for a tasty cholesterol-lowering lunch. It is also delicious in soups and can be eaten for breakfast with a splash of milk and honey instead of oatmeal.
Avocado - it is a high-fat food but could be considered for inclusion in a cholesterol-lowering menu. Go in for avocado instead of mayonnaise on your sandwich, topping off your omelet with avocado slices, or making a guacamole to snack on with high-fiber crackers or sliced vegetables.
Strawberries - it is sweet and, while the berry season is in the summer, frozen berries are an affordable substitute that can be enjoyed all year long.
Probiotics - these are live microorganisms that naturally occur. Yogurt falls in this category. Other common sources of probiotics include kefir, and fermented foods (like sauerkraut, tempeh, and pickles).
Grapes - red wine is said to be good for the heart. Grapes are not far behind. The heart-healthy polyphenol found in red wine, resveratrol, is also found in grapes of all colors. Moreover, fresh grapes provide other heart-protective nutrients like vitamin C, vitamin B6, potassium, and flavonoids.