Turtle Ltd to take up conservation of turtles in Rabindra Sarobar, Kolkata

Turtle Ltd, a men's apparel company, is keen to take up the conservation of turtles that have recently been sighted in the waters of Rabindra Sarobar in Kolkata. The Howrah-based company has been associated with turtle conservation projects for nearly a decade and it has experts on board who can assist the turtles that have reportedly been abandoned at Rabindra Sarobar. The conservation would help the turtles to adapt to the new environment and feel secure about it.
This has been reported in timesofindia.indiatimes.com dated 8 November 2015. 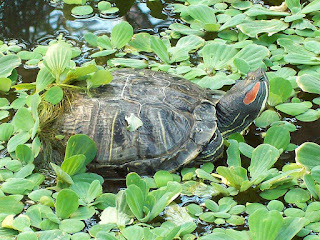 As the promoter and managing director of the premium menswear and accessories company has indicated, it was quite fortunate that members of the birding community and nature lovers had sighted the turtles instead of poachers and has also added that Turtle Ltd was ready to help the local community manage the turtles as a part of its corporate social responsibility.
Its team will contact the birders and lake authorities to work out an action plan for the turtles.

Moody in the mute mood (satire)


Mad rush for tourists stranded in Egypt to return home

Study reveals that online shopping is good for health

Inmates use mouse to carry drugs between cells in Brazil prison

Horror Museum in Colorado could be a money spinner